He was nine years old, my grandson Casimir, when he began playing the church organ. He then had the great luck to get one of the best Swedish organists, Mathias Kjellgren, as a teacher. Mathias is a teacher at  Lilla Akademien, a famous music school in Stockholm where all my three youngest grandchildren are pupils. He is also chief organist at the Santa Maria church in Sigtuna not far from Stockholm. 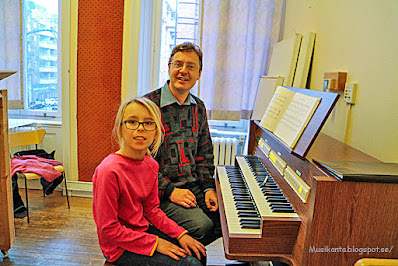 I myself is a church musician - old age pensioner since 20 years though. At home I have a digital organ and Casimir went right away to this one when he was visiting our place as a small child. He could sit at the organ for quite a while trying to play melodies or otherwise investigate the organ. After his parents having bought a digital organ he chose organ as his chief school instrument at nine and left his guitar behind.

Since then Casimir has been practising organ for two hours every day. On Saturdays and Sundays he mostly practises three or four hours. From the very beginning, his mother - my daughter Mirren - has all the time been sitting beside him, pushing him and helping him with the music. 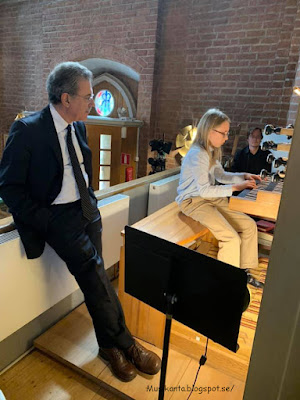 Casimir is playing the organ at the Santa Maria church in Sigtuna. Titular organist of  Saint Peter´s basilica in Rome -  Juan Paradell Solé - is watching him.
Intense practising combined with musical talent has given good results. Casimir is already playing virtuos pieces of organ music and has also had some public organ concerts. His next public organ consert will be held in the Santa Maria Church of Sigtuna on August the 4th. 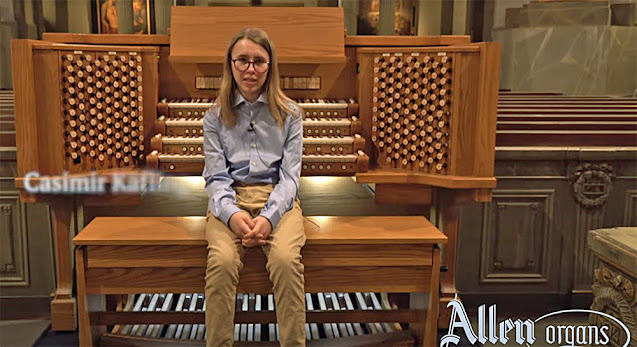 Casimir at the organ in Hedvig Eleonora church in Stockholm city.
A month ago Casimir made a recording for Allen organs - a PR disc that is going to be distributed all over the USA. He is playing the virtuos Toccata by Charles-Marie Widor. There are lots of comments to this recording - some of the commentators think Casimir is a girl. Can't understand why when there are such a lot of boys and men - especially musicians - who have long hair. Besides, I don't think that a girl organist would ever put on such organ shoes as Casimir has. :-) 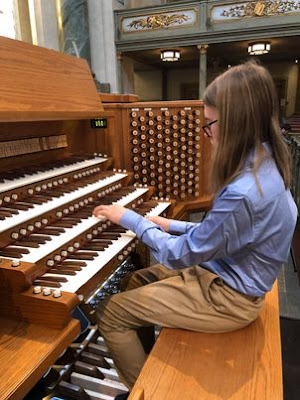 Here you can listen to the recording in Hedvig Eleonora church in Stockholm. Casimir was still 13 years old when he made this recording. He is now a young man of 14.
PS.
I've written this post in English because I lately have had a large number of visitors to my blog from abroad. If anyone of my Swedish blog friends wants to comment in Swedish I'll be very happy of course.
Upplagd av Musikanta kl. 15:25 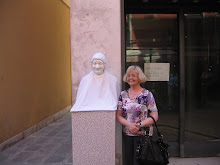